Tallying in with the topic of flow covered in the last post, here we look at the trap of control that can stand in the way of flow.

Ever attempt to control (yourself/another/an outcome/life)?
Or experienced being on the receiving end of someone else’s attempts to control?
Or if you don’t act out control, do you sometimes experience a constricting compulsion to control?

Control can arise out of fear, pain, limiting beliefs, and a lack of acceptance and resistance to ‘what is’. It can also stem from a sense of scarcity, in that on some level you don’t expect to get what you want therefore attempt to control to attain it. This underlying belief in scarcity, however, can repel manifesting an outcome in itself.

Control has nothing to do with power; where control is about trying to get or take, power is about your ability to create. It never works. Even if it temporarily achieves what it sets out to, it will never create any genuine sense of reward/peace/joy/fulfilment, or anything satiating or lasting. This is because control is founded on the false premise that what you seek is sourced outside of you and that you need to force or manipulate in some way to get it. With control no receiving occurs.

What you feel a need to control for may not even be for your highest. It may be what your ego rather than soul wants, for example, or what the limited perspectives of your conditioned mind are seeking.

When you attempt to control your reality, people or circumstances you are acting from a dis-empowered position that sabotages the very thing you may be attempting to gain, and reflects a distrust in things going your way, none of which are ever resolved through control.

Control can be an attempt to either protect yourself from something you perceive as negative, be that hurt/failure/loss/humiliation/pain/rejection, etc., or to attain something you desire yet on some level do not actually expect to receive, perhaps because deep down you feel you don’t deserve it, or because you have negative beliefs about attaining it, for example.

Even if you do temporarily get what you think you want because you have controlled to attain it, you have not received it in any true sense, and will therefore feel unfulfilled, plus doubt its continuation. You will know it came your way by forcing something into how you would like it to be, which in itself is symptomatic of an inability to receive and the ego’s ploy of having things its way regardless, which could also be against the grain of what would most serve you/others and a bigger picture.

Whatever you get through control will always be accompanied with an after-taste of doubt. The fear and negative undercurrents beneath any need to control will still be there, and you won’t really believe or expect the outcome to last.

Control, whilst an attempt to secure a result, is a sure-fire way to repel it. Life doesn’t like to be controlled any more than people.

Control is a very off-putting energy. Trying to get someone to be or do anything (whether that’s love you, approve of you, agree with you, give you attention, do things your way, or anything else) will typically create the opposite effect. No one wants to be controlled. People will innately resist and pull away from what they sense as controlling behaviour. The same goes with life. A needy, demanding, entitled or forceful attitude won’t generate positive results.

To help relinquish control take a look not only at what but why you are attempting to control. What is the fear or need that lies beneath it? What is it you are trying to get, secure, avoid, make happen, or protect yourself from? What are your beliefs, thoughts, feelings, and patterns around that?

Control is not necessarily pushy in-your-face behaviour. It can be more subtle and covert than that and show up in different ways, and what someone doesn’t do as much as what they do do.

Control and love don’t co-exist. When you are being controlling you aren’t being loving. For that reason, love is a great way to shift out of the grip of control into dominion, trust, peace, giving, receiving, and flow.

Surrendering control for flow, and releasing any limiting beliefs, fears and constricting emotions that lurk beneath a desire to control, allows more pathways to your heart’s desires and optimum outcomes to blossom and unfold.

Life can become more effortless, open, supported, fun and magical when you step into flow. That flow may be a focused and directional flow; your dreams and wishes can create a framework for flow to unfold through, for example, if you’re not overly fixed on them or rigid about exactly how they manifest. Be open, flexible, fluid and receptive.

Lean into trust instead of reach for control, and allow yourself to be carried along a river of flow. 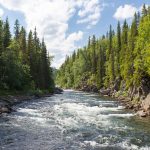 Stepping Into Flow for Automagic LivingFlow